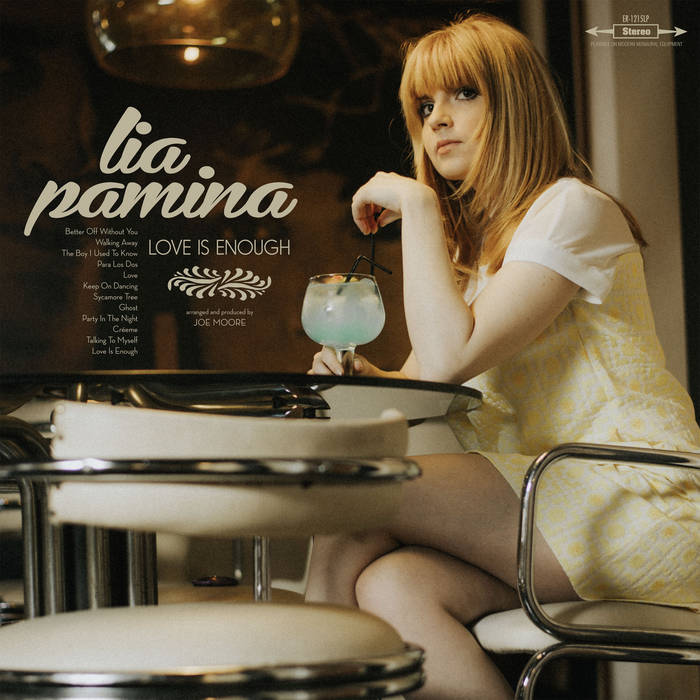 The songs released so far by Castellon’s Lia Pamina have been marked by, on the one hand, the influences of female voices like Claudine Longet, Astrud Gilberto and Françoise Hardy, and on the other hand, collaborations with important song-writers and producers who have dressed her songs and lyrics. That’s what happened on her debut single with Robbie Leff (Johnny Winter, Alice Cooper, THE CRABS), Roger Gunnarson (PUSHY PARENTS, THE GARLANDS) and Le Prix (PUSHY PARENTS, Kylie Minogue, Sally Shapiro). Her first full-length is sponsored by one of our most-loved names currently on Elefant Records’ roster: Joe Moore (THE YEARNING).

Lia Pamina’s voice and Joe Moore’s songs seem like they were destined to find each other. The sweetness and freshness of the former, and the imagination and fantasy of the latter, all poured into the evocation of a certain sound - music from the end of the 60s and the beginning of the 70s - where we follow them as they visit some of their favorite names, on an album that seems like it was conceived as a journey. Though this album is really conceived as a tribute to love. But let’s take this step by step. Or, better yet, song by song.

“Better Off Without You” begins with the trademark details, so close to other groups that work within the same parameters, like THE SCHOOL and CAMERA OBSCURA: an effective melody, a catchy chorus, and an exquisite result. “Walking Away” is one of the songs that most clearly has Joe Moore’s mark on it: the clavichord, the elegant touches of folk, the romantic halo of a song that the label “chamber pop” doesn’t even come close to describing. “The Boy I Used To Know” seems like it was made to be a part of the “The Umbrella’s Of Cherbourg” soundtrack. “Para Los Dos” surprises us in Spanish; it’s a delicious duo with Carlos René (musician and producer for AXOLOTES MEXICANOS and SAN FRANCISCO), to a bossa beat, evoking that marvelous trio that came together in La Fusa: Vinicius de Moraes, Maria Creuza and Toquinho. “Love” clears everything up: somewhere between THE LEFT BANKE and HARPERS BIZARRE, with love as the undisputed star, as the axis around which any and all motivation that each and every note on the album carries. With a trajectory like this, THE RONETTES and Phil Spector couldn’t be left out, but this time they do it directly, with a magnificent cover of their appetizing “Keep On Dancing”.

“Sycamore Tree” opens the B-side with a trip to the hallucinogenic world that THE BEACH BOYS and BROADCAST inhabit - marvelous, epic, exciting. Someone needs to write a musical dissertation about that bridge and the pizzicato. And all this in barely two minutes. Which is a bit longer than “Ghost”, evocative, like Lynsey De Paul’s most melancholy moments. “Party In The Night” is one of the fruits of the collaboration with the previously mentioned Robbie Leff, whose touches can still be found on this full-length with this delicious song that could have been a part of Françoise Hardy’s album, “La Question”. “Créeme” is an incredible LOS ANGELES cover, as if Jeanette herself had made it her own. Listening to the song and breaking into pieces are one and the same. “Talking To Myself” appeals to intimacy and includes, finally, Joe Moore on vocals. As if it were Nancy Sinatra and Lee Hazlewood. And the thing is, this duo could undoubtedly be one of the biggest stories for lovers of those collaborations. The album comes to a close luminously with “Love Is Enough”, which moves forward with a delicate but multi-color echo of soul, and which gives the album its name and reinforces the album’s main idea.

This album is made with sensitivity, doing justice to a title that appeals to love as the driving force and as the inspiration for delicous songs. Joe Moore and Lia Pamina. What amazing news.